In Washington DC, by accident, she discovered a new material in the filter’s dryer, the «lint»; this material lets her modulate new shapes, as references to animals in a variety of positions and situations. She gave life to those shapes with light and space, creating multiple groups in different situations and environments at the Corcoran School Gallery where she registered with her camera to build new series under the title Presences.

1978-80 From the wide lint photographic series, she generated several sequences starting from the slides and transfer to photocopies matrix paper in New York with the color Xerox machine, once in her studio in Madrid she transfer the series into modular panels.

In 1981 in January she shows Presences81. For the first time in Madrid at the gallery Aele, In the small brochure, Eusebio Sempere and Paloma Navares wrote a presentation. In this show, the artist Pedro Garhel made a performance with music alive. Part of this work was shown at the first contemporary art fair ARCO 82. 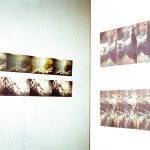 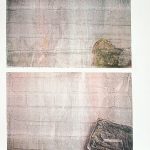 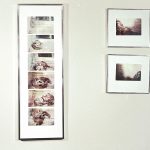 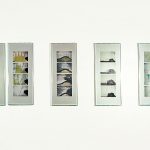 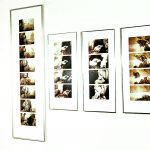 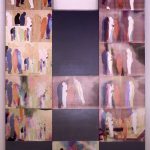 It Was the title of this new work done totally at Sonia´s studio in Chicago in 1982 with the new machine VQC (very quick copier). These sequences were created with two very simple elements, a small pack of cotton and its cord, moving them on the machine glass when the light were acting.
This panel was shown at the Galeria Aele in Madrid in 1984 and at the Palau Solleric in Palma de Mallorca in 1986.

The image is manipulated through light, as light generates color. When the machine is capturing the image on the glass, she performs, moves, and interfered to change the capture of the original; and in many cases, the color is treated manually with conventional pigments.

From the containers she rescue clays with human shapes, heads, bodies, and she puts these elements on the window of the photocopy machine, together with little bones, canes, a variety of papers etc.
These series were shown at the Museum of Fine Arts in Santander in 1983, where she presented her first video installation. She has her first eighteen pages catalogue edited by the Museum in May 1983. 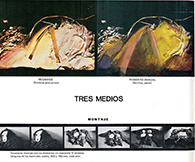 IT have several sequences made by different organic materials that once at the copier’s glass and using the light and the movement, she created a human relation between the opposite objets as hate and love. 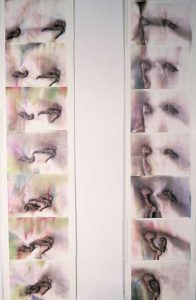 These works were shown at he exhibition in Nicanor Pignole Gallery in 1985 in Gijon, at the opening of the new Museum Reina Sofia in Madrid at the exhibition called «Process, culture and new technologies» in 1986 and at the Spectrum gallery in Zaragoza in 1987.

Another series were created in the middle of the 80´s with different objets as the big panel made with crystal marbles in movement, at the copier’s glass. This work was called «Crystal Sea» or «underwater cathedral by Debussy». It was shown by the first time at the La Casa del siglo XV in Segovia in 1987, in the contemporary art fair ARCO in the same year and also at the Museum Esteban Vicente in 2004.