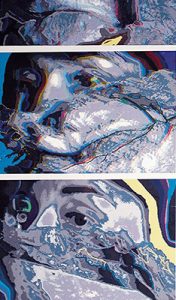 Photo video computer Lumena is a computer tool for artists using a versatile graphic system. Marisa González has animated her images as she use to do with her copy machine generated images or photography. She captures them with still- video camera and manipulated through the Lumena computer system. The whole equipment is from the beginning of the 80´s and was invented by John Dun a Sonia Sheridan Generative Systems student.

This graphic system is a versatile computer tool for artists, for video productions, photo manipulations, and digital art. It captures the images in movement with a web cam and with the digital palette, the access to the menu tools for its manipulation by custom brushes is easy in order to create and save the images on disk. 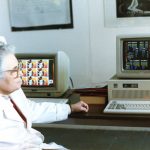 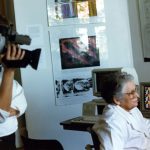 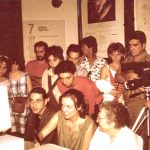 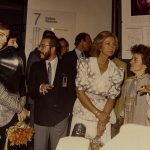 Sonia Sheridan introduced this system in Europe, in Paris for the first time at the Electra exhibition at the Contemporary Art Museum in 1983, in a workshop during all the exhibition period. Three years later, in 1986, she introduce it in Spain at the exhibition «Procesos, Cultura y Nuevas Tecnologías» in the opening of the new Museum Reina Sofía in Madrid.

Years later, in 1992 and with this digital system, was taking place in Madrid during seven days, the workshop-computer-video-performance «Time Space» with the Lumena inventor John Dunn, Sonia Sheridan, Jamy Sheridan and Marisa Gonzalez at the Circle of Fine arts at her workshop «The poetic of technology».