The author made this series with Lumena photo-video-computer equipment, invented by John Dunn, a student of Generative Systems. This computer system was donated by Sonia Sheridan to MG in 1992 to spread this graphic method in Spain. Premiered at the Centro de Arte Reina Sofía in Madrid in 1986 in the exhibition Procesos, Cultura y Nuevas Tecnologías (Processes, Culture and New Technologies).

This versatile system of capturing the digital image in real time, generates the serialization and metamorphosis of the image and was used by the author to make the series of clones, as well as the series of digital portraits with numerous colleagues, critics and friends of art who for several years in the 90’s went through her studio to experiment together with this new digital language such as Pedro Garhel, Claudia Giannetti, Menene Gras, Lola Dopico, Carlos Jimenez and José Ramón Danvila among many others. They participated and experimented with performative character with the author.

A social testimony of the art world of the 90’s in Spain. 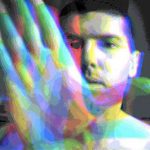 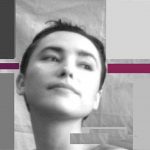