The destruction of a nuclear plant”, is her personal and physical involvement in the dismantling of the plant that shows the contradiction between the monumental and dangerous industrial site and its real location in natural paradise seashore.
This digital technology work in progress project was created by means of long hours of video and photographic recordings, and endless objects rescued from this huge nuclear plant in Bilbao now being dismantled.
Her interest in industrial archaeology and its inherent concerns -akin to memory and oblivion, architecture, town planning and their social and cultural resonances- are manifest in this work.
Lemoniz Nuclear Plant was built in the 70’s, in Spain, some 20 miles out of Bilbao in a steep and vast coastal spot. This imponent and controversial industrial macro-complex never got to be inaugurated. The two cylindrical monumental buildings, housing the reactors, the turbine chamber and the whole aggregate of facilities adjuncted to the nuclear reactors have become an essential document of the late 20th century industrial archeology. Her first approach to Lemoniz, which probably is the most critical one, tries to present this plant as a monster generated by a dream characteristic of scientific or, more accurately, techno-scientific reasoning.
This work in progress has been shown in several spaces in one-person show such as Gallería AELE Madrid, CAB de BURGOS, VANGUARDIA Gallery Bilbao. 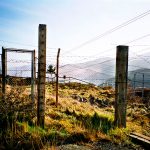 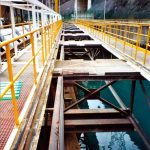